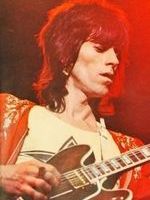 It was 42 years ago today (February 27th, 1977) that Keith Richards was arrested in Toronto for possession of heroin. Richards, who was in town to perform with the Rolling Stones at the El Mocambo Club for their upcoming concert album, Love You Live, was awakened by the Royal Canadian Mounted Police who found five grams of cocaine and 22 grams of heroin in his room, among other substances. Richards was charged with “possession of cocaine and heroin with intent to traffic.”

Richards recalled being awoken by the officers smacking him conscious so that they could formally arrest him: [“That took them about two hours to drag me out — pow, pow. I woke up with, like, rosy cheeks. ‘Oh, he’s awake: You are under arrest!’ (Laughs) ‘Oh, great!‘ I looked at the old lady and I said, ‘I’ll see you in about seven years, babe.'”] SOUNDCUE (:15 OC: . . . seven years babe)

Although Richards was eventually released on $25,000 bail, due to the trafficking charge, he faced a minimum seven-year prison term if found guilty. Richards, who due to his growing and public drug use had been on the wrong side of the law since 1967, was now facing the most serious criminal charge of his life.

He eventually received a suspended sentence after the court concluded that Richards did not bring the drugs into the country, but rather purchased them while in Canada.

During the trial later that year, a blind woman and die-hard Stones fan privately appealed to the judge and explained how Richards had always looked out for her when the band was on the road in Canada, making sure she was safe and cared for, and often helping find her a ride home after the shows.

Keith Richards credits the fan for single-handedly helping find a way to get him on the right side of the law: [“This chick went to the judge’s house in Toronto, personally, and she told him this simple story, y’know? And from there I think he figured out the way to get Canada and himself and myself off of the hook. And so I was sentenced to a concert for the blind — which I gladly performed, y’know? And my blind angel came through, bless her heart, y’know?”] SOUNDCUE (:21 OC: . . . her heart, y’know)

Back in 1989, Keith Richards pulled no punches while recalling his final attempt at kicking heroin: [“Cold turkey’s hard, but it’s only three days of climbing walls and then the fourth day you start to feel better. After that, you’re on your own, y’know? And it’s a matter of what it is you wanna do. I got off after that by. . . y’know, after 10 years on that stuff, you live in this other world, where everybody you know’s one. So the cats would come around and try to sell you stuff, so I started to get off — my high for a while was watching their faces when I said ‘no.’ ‘Hey man, just a taste, man.’ And just when they couldn’t make a sale just to watch their face, that would be my high.”] SOUNDCUE (:30 OC: . . . be my high)

Part of Richards’ sentence involved playing a local charity concert for the Canadian National Institute for the Blind in 1979 with his and fellow Stones guitarist Ron Wood‘s side band the New Barbarians — along with the Rolling Stones, who performed a show closing set. By that time, Richards had been heroin-free for two years, having quit the drug cold turkey.

The Rolling Stones kick off their 2019 “No Filter” tour on April 20th in Miami Gardens, Florida at Hard Rock Stadium.