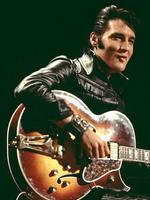 The special, hosted by Shelton, will create the look and feel of The King’s legendary ‘68 Comeback Special, where he performed both stand-up, rocking numbers and a more intimate, stripped-down set wearing black leather.

The Best of the ‘68 Comeback Special includes 15 remastered Elvis performances from the ‘stand-up’ and ‘sit-down’ shows filmed for the ’68 broadcast, plus three original studio recordings to represent songs that appear in the new special — including a new version of “If I Can Dream,” featuring Elvis’ original vocals plus those of Underwood, Mendes, Rucker, Shelton, and Malone.

Shortly before his 2016 death, “Memphis Mafia” member Joe Esposito said it’s a testimony to Elvis’ good spirit that his legacy continues to endure: [“It’s just unbelievable the reaction that’s still going on today about him, and it’s like a resurgence in him, y’know? And I tell ya’, I feel great because the people. . . Anybody that ever met Elvis Presley would love the guy. Not what you read about him, what you hear about him, people say about him, but once you meet him you cannot help but like him. And that’s been done by a lot of people that said bad things about him back in the ’60s and ’50s, then when they met him in the ’70s or something like that, their whole outlook on Elvis Presley changed. He had that kind of charisma.”] SOUNDCUE (:31 OC: . . . kind of charisma)

The tracklisting to Elvis Presley’s Best Of The ‘68 Comeback Special:

CHECK IT OUT: Elvis performing “All Shook Up” from The ’68 Comeback Special: