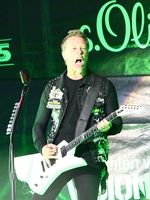 Metallica and the San Francisco Giants have announced that the seventh annual “Metallica Night” will take place on April 26th at Oracle Park — formerly AT&T Park — in San Francisco as the Giants take the field against the New York Yankees.

A statement on the band’s web site said, “Members of the band will be on hand to start things off with the National Anthem and first pitch, sticking around all night to cheer on the team against the New York Yankees. As is customary, we’ll take part in some of the between-inning fun and games, as well as an exclusive pre-game VIP event.”

Special Event Metallica ticket packages include a ticket to the game and a limited-edition Metallica/Giants reversible knit beanie. A portion of the proceeds from every “Metallica Night” Special Event ticket sold will benefit the band’s own All Within My Hands foundation.

There will also be a pre-game VIP event in Triples Alley as the band celebrates the release of both its very own Blackened American Whiskey and Enter Night Pilsner from Stone Brewing. Lars Ulrich, Robert Trujillo and reps from both companies will be on hand for a question-and-answer session.