To say this year’s Presidential Election season has bee a “bit bizarre” is truly an understatement.  In fact, I have been saying for weeks that it more resembles a reality tv show than a great political process!  But, it’s getting even weirder as a cartoon has announced his candidacy! I know, I know, it’s all a spoof over the new Dr. Seuss book, “ONE VOTE, TWO VOTE, I VOTE YOU VOTE”, but trust me, someone will vote for the old Cat In The Hat!  Hey, IT IS Amurrrrica!  And this is not the first time a celeb has had a run at the Oval Office!  Anyone remember comedian Pat Paulsen back in 1968? Musicians Alice Cooper in ’72 or Joe Walsh in 1980?  More recently famous folks like Stephen Colbert back in 2008 seriously had aspirations, and even Roseann Barr threw her “proverbial hat in the ring” in 2012!! Rumors fly now that Kanye West is serious about a 2020 bid!! 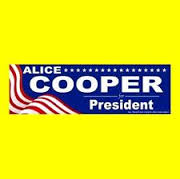 Or wait for it….Lindsay Lohan may want to be Madam President some day!!!  See..it CAN GET MUCH WEIRDER!!!!!  But, then I stop and think about a former actor who made hit movies with a chimp “back in the day”, and that guy turned out to be a pretty amazing President!!  Hmmm??