Oh yeah, I have done some pretty wild stuff in the 30-plus years I have been doing my “radio thang”, Had my hair dyed green for a St Patrick’s Day broadcast, had ALL of my hair cut off and sold to raise money, been “buried in a pyramid” of cola while spending a weekend stuck in a camper at the mall, been “arrested” and put in “jail”, dunk tanks, and donkey basketball.. the list goes on and on.  And, I’m not complaining, because it ALWAYS went to help a good cause!  But someone recently reminded me that this is the anniversary of the time I was frozen alive in a block of ice!!  Oh wow!!  25 years ago when the “Country Behemoth” known as FROGGY-98 was just a few months old, and I was trying to convince listeners that I was now “JACK JUMPER”, I was asked to let Dr. Silkini hypnotize me, and place me inside an iced-over coffin of sorts, where I would stay for two days and raise money for a selected charity  He was renowned and had done it hundreds of times! Hmmm?  Okay, sure!!  So back in July of 1991, I did just that!  A car dealer in Tipton was the site.  I would do minute-long broadcasts from inside, and the public could come and take a look at the “Frogsicle” as the late Steve Kelsey called me, through a small plexiglass portal cut in the ice inside the big, refrigerated truck, and donate money to get me released. And folks could come by 24-hours, around the clock…and THEY DID!!  We raised a huge sum of cash that weekend, scared the “bee-jeebies” outta my family and co-workers, but I laid there in what was basically a chest freezer with 5,000 thousand pounds of ice over it, FOR TWO DAYS!!! No food, beverages, or bathroom breaks!  And when it was all done, and the crowd stopped cheering, and the cameras left,  the Doc looked at me and asked,”  I do another event called BURIED ALIVE, wanna do it next?” 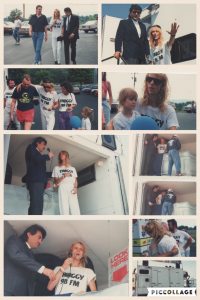 I sure am glad that I actually said NO for once!!