Ian “Lemmy” Kilmister passed away about six months ago, and as a life-long Motorhead fan I was of course saddened.  But now I am amazed and pleasantly surprised at the posthumous accolades this man is accumulating.  Jack Daniels released a commemorative whiskey, summer rock festivals are naming stages after him, Grand Theft Auto V has put his image in their video game, there is a statue being proposed outside his favorite L.A. bar, and now Lemmy’s face is gracing  the German postage stamp!!  Yep,  the Deutsche Post and the German newspaper Bild  came together to create the official stamps to honor Lemmy.  Who would have thunk??  I remember the day when “so-called music people” said Lemmy and his boys in the ‘Head were “garbage”, and would never “make it”!  Statues?  Face on a stamp?  Guess the “music people” were wrong!! 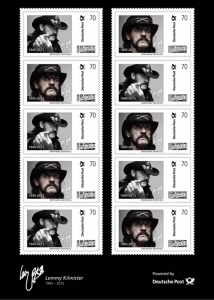