As a man who has had his share of lengthy locks and some pretty wild hairstyles in my day, I have had a peculiar interest in the fad of what people call the “Man-Bun”.  So as I like to do, I did some research on the “ponytail’s hipster cousin”.  From what I’ve learned, they go WAAAAY back in history to the third Century, worn by Chinese Terracotta Warriors (woah, cool!)  There is even some history of Beatle George Harrison sporting the “bun” occasionally in the 70’s.  But up until about 2013 when hipsters and stars like basketball’s Joakim Noah, soccer’s David Beckham, and actors Bradley Cooper and Brad Pitt started wearing them, we long-hairs just used a hair tie and ponytailed the stuff when we got hot and sweaty!   Heck, there’s even a website for how to do your bun properly now at:  manbunhairstyle.net. Don’t wanna take the time and grow your hair to longer lengths? You can get a fake clip-on one if you’d like at Groupon for just $9.99!!  I AM NOT MAKING THIS STUFF UP!!  Oh, one other note guys..in a recent survey of women, 58% said they WOULD NOT date a guy with a man bun!!!!  Back “in the day” I would occasionally sport a “Whale Tail” to be like my daughters,(y’know, the thing Gene Simmons of KISS wears on his head)…who knows, MAYBE I could’ve started a trend myself back then??!! 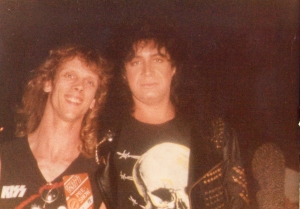