15-year-old FATIMA PTACEK is the latest voice of “Dora the Explorer”, and she’s being dragged into court by the parents of a former classmate.

They claim Fatima got their daughter expelled from the fancy high school they both went to in New York.

Back in December, Fatima and two female classmates were VAPING in the girl’s bathroom.  But an older student ratted them out, and the one girl was kicked out of school . . . Fatima only got a three-day suspension.

It seems like she got off easy . . . after all, it’s hard to imagine the school expelling Dora the Explorer.  But then again, the third girl wasn’t punished at all.

The parents of the expelled girl say Fatima peer-pressured their daughter into it, because she wanted to appear “cool” in front of her since, she’s a celebrity. 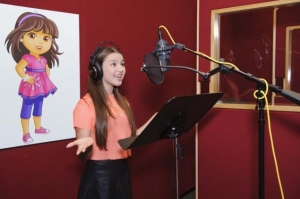 For what it’s worth, no drugs were involved, not even tobacco.  It was just caramel-flavored water.