Three guys in Micronesia were sailing between two islands last week, when their 19-foot boat capsized.  Then they swam two miles in the dark, and made it to a deserted island.

But they were still in trouble, because Micronesia is basically in the middle of nowhere.  It’s in the south Pacific, about 500 miles from Guam.  And it has about 600 islands, so the chances of someone finding them were pretty slim.

So they decided their only chance was to use a bunch of branches from some palm trees, and spell out the word “HELP” on the beach.  Just like in the movies.  But it actually WORKED.after three days, the pilots of a U.S. Navy search plane spotted it last Thursday, and then saw the guys standing on the beach waving bright orange life jackets.

Then a boat from another island four miles away picked them up, and now they’re all okay. 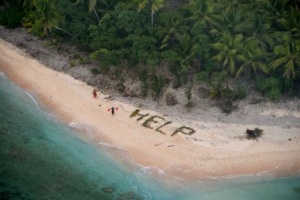