An eight-year-old girl named Heidi VanSumeren lost all her books last month when her family’s home burned down in Parma, Michigan.

But then a children’s author named Bob Shea was speaking at her school a few days later, and asked if he could post something about it on Twitter.

He’s not super famous, but he wrote a book called “Dinosaur vs. Bedtime” that’s pretty popular.  So he posted her school’s address . . . asked his 4,000 Twitter followers to send Heidi some books . . . and she’s already gotten HUNDREDS of them.

A bunch of Bob’s friends are children’s authors too, so they’ve been sending signed copies of their books.  And she’s also gotten a new desk . . . a chair . . . a bookshelf . . . and a bunch of school supplies to replace the ones she lost.  (Here’s a video of some of the packages she’s gotten so far.)

Her mom says it’s been a great lesson for her that even when bad things happen, there might be something good right around the corner.  And one of Heidi’s teachers posted a video where Heidi thanks everyone for helping her out. 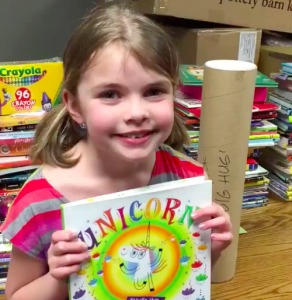