MERLE HAGGARD passed away yesterday on his 79th birthday, due to complications from pneumonia.  He’d battled health issues for years, and had part of his lung removed after a cancer diagnosis in 2008 . . . but he kept touring until his family forced him to stop.

He even predicted his own death to the day.  His son Ben posted this yesterday on Facebook:  “A week ago dad told us he was gonna pass on his birthday, and he wasn’t wrong.  [An] hour ago he took his last breath surrounded by family and friends.”

Obviously Merle influenced tons of performers.  He and his friend BUCK OWENS were known as the architects of the Bakersfield sound, which was guitar based, and more stripped-down than what was popular in Nashville at the time.

He was raised in a converted railroad car, and was a small time criminal who “rode the rails.”  Then in 1958, he was in San Quentin State Prison when JOHNNY CASH performed his legendary show.  Obviously that had a strong influence on him.

He started having success in the 1960s with songs like “Workin’ Man Blues”, and “Mama Tried”.  And his career skyrocketed in 1969 when he released “Okie From Muskogee”.  That and “The Fightin’ Side of Me” became his signature songs.

Merle recorded more than 90 albums, and had 112 songs on the country charts, including 71 Top 10 hits. 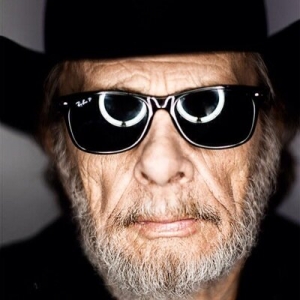 He was also inducted into the Country Music Hall of Fame in 1994, was a Kennedy Center honoree in 2010, and was a Grammy Lifetime Achievement Award winner.